On Wednesday, Amp Motorworks ceremoniously handed over the keys for the first of 1,000 electric Mercedes-Benz ML 350 SUVs to Gisli Gislason, the chairman and chief executive of Iceland’s Northern Lights Energy.  When Amp’s PR man invited me to the festivities, I decided a short road trip through the Midwest wouldn’t be too painful a price to see Amp’s headquarters for the first time and attend the press conference.

Amp’s digs are situated right off the Ronald Reagan Cross County Parkway in the pleasant suburban town of Blue Ash on the outskirts of Cincinnati.  The headquarters includes a modernly designed administrative building and about 10 remarkably clean car bays on each side.  Electric vehicle garages don’t have to deal with as much grime as you average Jiffy Lube. 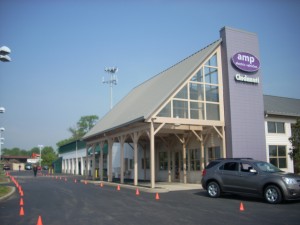 In the showroom, I was able to speak with the CEO of Nothern Lights Energy briefly.  At roughly $100,000 a pop, Gisli Gislason is confident that he can sell the units over in Iceland for a profit.  Since there are no import tariffs on electric vehicles in Iceland, the electric upfitted SUV’s will be sold for about the same price as a regular Mercedes ML 350.  When you factor in the high gasoline prices, about $8 a gallon right now, a Mercedes EV becomes a logical buy in the island country.  Iceland also generates much of its electricity through geothermal and hydroelectric sources, which means these electric vehicles will truly be clean cars.

The new CEO of Amp, James Taylor, gave a short speech along with Gisli Gislason, and even Mark Mallory, the Mayor of Cincinnati, made an appearance.  Taylor symbolically handed over the keys to the converted ML 350 on the showroom floor to the Icelandic CEO, who happily and carefully drove the car out the garage door to much fanfare and photographs.

Afterwards, I spoke to a mechanic about the day-to-day process of assembling these upfitted electric vehicles.  He was a retiree who had a dream of building his own electric vehicles, but jumped at the opportunity to work on the EVs at the AMP garage. He said there are about 4 mechanics and 4 electrical engineers in the garage.  Which raised a logistical question of how they were going to expand to meet the newfound demand of 1,000 vehicles in five years.

I met with JD Staley, Director of Sales and Marketing to test-drive the electric Mercedes.  I expected it to behave much like their Equinox I test-drove last summer.  But the ride was exceptionally smooth, and the ML 350 handled like a luxury vehicle.  Aside from the lack of engine noise, a casual driver would not be able to distinguish the way it drives from a regular Mercedes SUV.  This is what Amp intended, to make the transition to electric as gentle as possible.  I was allowed to floor it on the backstretch behind the facility, and acceleration is pretty good with more torque than the specified 10-second 0-60 time lets on.  With an approximate range of 100 miles per charge and 5 seat capacity, the Amp Electric ML 350 should be an easy sell in Iceland.  While driving, I asked Staley about how they were going to satisfy the order of 1,000 vehicles.  He said they are looking at cites expand their assembly capacity so they can produce 20 vehicles a month starting next Fall.

Amp is still a small company with great ambition and tall orders to fulfill.  I first covered them in 2008 and in spite of the economy, they managed to grow and keep putting real, drivable electric vehicles on the road.  In the coming years, Amp will be expanding capacity and creating jobs in the Midwest.  With innovative ideas and the courage to follow through, Amp is a model 21st century American company I look forward to seeing grow.