Some say that the BMW i8 is the future of motoring, and have even favored it over an M3, but can it really stack up against the Alfa Romeo Giulia Quadrifoglio Verde?

Before answering this question, we have to consider a number of facts, the most important being the German sports car’s age, as it’s getting ready to blow four candles this year.

So, ready to see how the two potent machines stand against each other in a half-mile drag race? Just hit play below.

If you are looking for a head turning serial electric hybrid, Doug DeMuro, says, “Yes!” The BMW i8 is not only a futuristic looking way to reduce your dependence on oil, but also a lot of fun to drive. Doug mentions how well the hybrid handles at speed, and it has a lot of pop, sporting a 0-60 in around 4 seconds. Another interesting thing about the video is how BMW simulates the sound of a V8 engine into the cabin when you punch the “gas”.

BMW have built some fantastic vehicles in the past, and it looks like a trend that’s set to continue well into the future. The German firm is taking an active interest in alternative fuel technologies. One of the most notable examples of hybrid technology is the BMW i8.

If you’ve not heard of that model before, let me tell you more about it. It’s a hybrid sports car that’s powered by electric motors and a small three-cylinder engine. Of course, the only downside is that it’s one of the world’s most expensive sports cars!

Still, if money is no object and you’d like to drive a stylish, high-performance and eco-friendly car, the BMW i8 is for you! 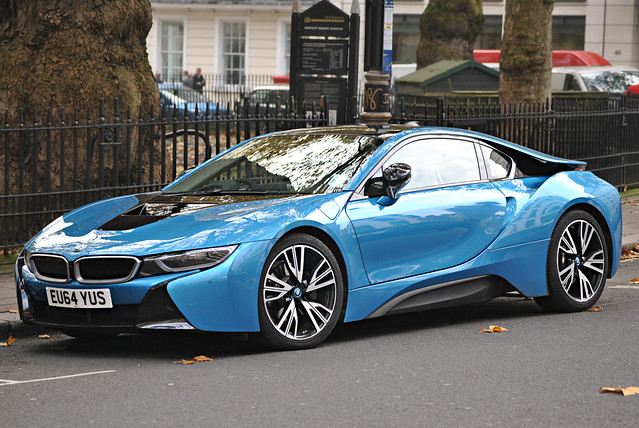 It looks futuristic – in a good way

I don’t know about you but have you ever noticed just how weird today’s hybrid cars look? Car manufacturers associate hybrid vehicles as ones that should look futuristic. I get that car makers want to think outside the box when it comes to styling.

But some cars are just too out there. Toyota Prius, I’m looking at you!

The fantastic thing about the BMW i8 is that it too seems futuristic – but in a GOOD way! The contours of the vehicle match the front and rear ends well. It doesn’t look like a car Homer Simpson would have designed!

It uses lots of carbon fibre

We all know that car batteries weigh a lot. The heaviest are the ones that get used for electric and hybrid vehicles.

That’s not a good thing when you’re trying to design a fast hybrid sports car! To overcome this problem, BMW have used lots of carbon fibre. It’s 50% lighter than steel and 30% lighter than aluminium. But it’s just as strong as both metals.

The door architecture is amazing

When you open the doors on the BMW i8, one thing you will notice is that it uses “dihedral doors.” Or, as the guys at Thames Motor Group put it, gullwing doors! They are the kind of doors you might see on cars like Lamborghinis and even the Mercedes-Benz SLS AMG.

They swing upwards when opened. You might think that it’s not possible to do that, given how heavy car doors are. But BMW claim that the doors are 50% lighter than conventional ones.

The car boasts 0-60 mph speeds of just 4.3 seconds. And the eDrive system boasts a total power output of 231 brake horsepower. It doesn’t sound like much, given that cars like the BMW M4 have more power.

But you need to bear in mind this car is lightweight. The power to weight ratio is different in the BMW i8.