BYD Auto has been a hot topic for green geeks and business savvy investors for the past few years.  We started writing about them in 2008, pronouncing them the “sleeping giant” of China. There was strong interest from investors like Warren Buffet, and Portland, Oregon wanted to establish a BYD headquarters in their city. Several setbacks and slow starts later, BYD is still very much in a morning stupor.

The good news is in the technical details of BYD’s E6 crossover.  BYD’s Fe battery gives the E6 a range of 186 miles per charge and the vehicle’s top speed of 87 MPH makes it highway capable.  BYD touts their Fe lithium iron phosphate battery as fully recyclable and quick charging.  they claim the battery can be fully charged in as little at 40 minutes.  Field testing of their all-electric crossover E6 began in 2010, and sales to the general public in China have only just begun in October of 2011.    Lackluster sales and lack of a charging infrastructure have delayed BYD’s electric takeover in the United States.  In January 2011 BYD announced that the American version will be more powerful than the Chinese version, and it will have a 60 kwh battery pack with a 160 kW electric motor, capable of reaching 60 MPH in less than 8 seconds.  The Chinese company plans to be able to sell the e in America for $35,000, before any government incentives.

Unfortunately for excited electric car fans in America, BYD announced last October that there will be an 18 month delay of retail sales in the United States due to inadequate charging infrastructure. So it doesn’t look like we will see the all-electric e6 or range extended hybrid F3DM and F6DM until at least 2013. These types of setbacks are all too common in revolutionary industries such as electric vehicle manufacturing. It will take time for BYD to integrate but I’m confident they will do so in the future.

According to the Chinese automobile manufacturer, the F3DM will be available for private purchase in Shenzhen on March 29th, 2010.

The F3DM is a range extended electric vehicle, meaning it has a completely electric drivetrain and a gasoline engine is only incorporated as a generator to charge the battery.  BYD claims their Dual Mode is different from a range extended electric vehicle because it actually has three modes of operation: 1) Full battery-powered electric mode 2) Series-hybrid mode, in which an engine drives a generator to recharge the batteries, acting as a range-extender like in the Chevy Volt. 3) Parallel hybrid mode, in which the engine and motor both provide propulsive power, like in the Toyota Prius.

The BYD F3DM is priced at $22,000 and will hopefully be available in the US by 2011.  However, this is twice the price of an equivalent car in China using traditional fuel.

A BYD spokesman said that the new version of the F3DM, available for private buyers will implement more advanced battery and electronics to further enhance efficiency.  The first selling location will be Shenzhen, which plans to have 24,000 cars on the road, possibly with the help of government subsidy programs. 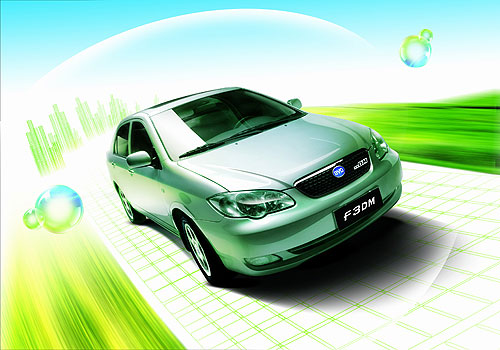 China is working fast. BYD began sales of the BYD F3DM plug-in hybrid on December 15, 2008. This occurred days after Washington and Beijing announced plans to work together on green car technology: China’s Science & Technology Ministry signed an agreement with the U.S. Energy Dept. to collaborate on battery technology to power cars on Dec. 11.

The BYD F3DM is a Camry clone on the exterior, but inside the car utilizes BYD’s advanced ferrous battery technology. The F3DM can drive 100 kilometers (62 miles) on a charge, shifting to gasoline when the battery runs low. The car will be able to reach a top speded of 100 mph with a 0-60 mph time of 10.5 seconds.

BYD claims their Dual Mode is different from a range extended electric vehicle because it actually has three modes of operation: 1) Full battery-powered electric mode 2) Series-hybrid mode, in which an engine drives a generator to recharge the batteries, acting as a range-extender like in the Chevy Volt. 3) Parallel hybrid mode, in which the engine and motor both provide propulsive power, like in the Toyota Prius.

Full recharging takes about seven hours in a traditional outlet or one hour at the company’s charging stations. Ten minutes in a traditional outlet gives the battery a 50 percent charge, according to BYD.  That is pretty unbelievable though. Everyone makes the claim of a ten minute recharge; most likely this will need a high output charging station.

The BYD F3DM is priced at $22,000 and will hopefully be available in the US by 2011.  BYD’s first F3DM sale was an order of 50 cars for the Shenzhen municipal government and China Construction Bank as part of the company’s strategy of selling to corporate buyers first, then mass market the vehicles in China the second half of 2009.

BYD Auto, offspring of Chinese cell phone lithium-ion battery giant, will soon be releasing two electric car drivetrains.  One will be the fully electric F3e technology, which will allow for a top speed of over 150km/h, a 13.5s 0-100 km/h acceleration, 300km / per charge range, and and a battery life-cycle of about 600,000km. This stems from their superior Fe battery technology. The Fe-battery has such innovative advantages as low cost, zero pollution, zero noise and recyclable. It can deliver voltage twice as high as a standard Ni-MH battery, while costing less than comparable batteries.

BYD is also making a huge investment into range extended vehicles, notably the BYD DM (Dual Mode).  The BYD site seems to try to distinguish this as something more than an electric vehicle with a gasoline range extender, but they are not very clear. This is how BYD describes their technology:

As early as in 2003, BYD started DM electric vehicles project, on which currently 500 auto engineers are working. DM stands for Dual Mode and BYD DM (Dual Mode) electric vehicle combines a solely electric vehicle system and a hybrid power system. The DM hybrid system is an advanced technology which integrates two hybrid powers to control electricity generator and electric motor, thus not only massively reducing fuel consumption and emission but also enhancing the power and operation performance. In addition, it enables dual energy supplies via both recharging and refueling, which makes up the dual mode hybrid system in the real sense. If we call an electric driven system “EV” and the hybrid electric system “HEV”, then BYD DM should be named “EV + HEV”. This system is bound to replace the traditional electric-gasoline hybrid system, becoming the most popular and advanced new energy hybrid system in the world.

BYD (Build Your Dreams) Auto is a Chinese automaker that was founded in 2003 as a branch of BYD Limited, one of the world’s leading manufacturers of lithium-ion batteries.  With this established background in lithium-ion technology, BYD is ambitiously planning on releasing some of the most viable, reasonably priced electric vehicles ever.  Their first production electric car will be the plug-in hybrid, F3DM.

The F3DM (Dual Mode) hybrid is a mid-sized, Toyota Carolla like, sedan with a range of 62 miles (100 km) in the all-electric mode and 267 miles (430 km) total. The vehicle is supposedly going to be for sale in China as early as next month, November 2008, and available to the European market in 2010.  It was rumored the car could be priced as low as $15,000, but more recent reports state it will be closer to $25,000.  This is still a great price for what could be the the first ever, mass produced plug-in hybrid. (Wikipedia, BYD F3DM)

Their larger hybrid is the F6DM, which is a Toyota Camry clone stylistically, and has nearly identical performance specs as the F3DM .  BYD is obviously playing it safe by using proven and popular body styles that will make these cars indiscernible from regular, internal combustion vehicles.

BYD has been making so much news lately, it is hard to tell what is fabricated and what is backed by solid evidence. This is mostly due to the enigmatic nature of Chinese corporations. The strongest argument for BYD’s legitimacy could be from the fact that Warren Buffet, legendary investor, and his firm, Berkshire Hathaway, made a bold investment of $230 million in BYD auto last month. Portland, Oregon is also showing interest in hosting a BYD headquarters in America. The commissioner is showing a keen interest in BYD’s upcoming all-electric model, the F3E, which could have a range of 186 miles, a top speed of 100 mph, and a battery life of over 370,000 miles. The F3E will look identical to the F3DM. BYD also plans to sell some electric models to Israel, which is currently installing a countrywide electric vehicle recharging grid as part of Project Better Place.

This is all exciting news for the electric auto industry. China is making a statement that it wants to be a leader in green technology. Hopefully, they keep up their incredible pace, so that the rest of the world will have to follow.