Jaguar is no stranger to designing innovative and powerful concept cars. Many of these prototypes go on to become production vehicles. One model that got everyone talking was the Jaguar C-X75.

It first got unveiled back at the 2010 Paris Motor Show. Jaguar says the car started life as a design concept and reached the prototype stage in just two years. That is quite impressive given the styling of the car. And also the unique way this hybrid monster works!

The Jaguar C-X75 is a sports car that we’d all love to own some day. But the sad news is that the project got shelved. The reason? Jaguar Land Rover stated few people would buy it at this moment in time “as a result of the global economic climate.” 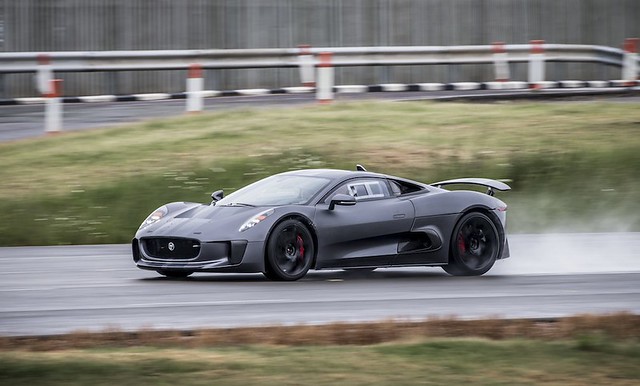 I suspect the price of the car had something to do with Jaguar’s decision to pull the plug on the C-X75 supercar project. Would you pay between £800k to £1 million for a hybrid supercar during today’s austere times? Nope, me neither!

Sadly that means you aren’t likely to see the C-X75 as one of the H.A. Fox Jaguars on display at their showroom. Still, that doesn’t you and I from wanting to get behind the wheel of one some day (after winning the lottery, of course)!

So, what is it that makes this unique car a serious contender for supercars like the Porsche 918 Spyder? And various Ferraris and Lamborghinis?

The Jaguar C-X75: an eco-friendly supercar?

The four-wheel drive Jaguar C-X75 supercar is quite a unique hybrid vehicle. It boasts a ridiculous 850 brake horsepower and 1,000 Nm of torque! But what is it that produces such a monstrous amount of power?

According to Jaguar, the car uses four electric motors – one to power each of the four wheels. The batteries these electric motors are all connected to get charged from two micro gas turbine engines. Yes, that’s right: gas turbine!

Bladon Jets in Worcestershire built the turbines. On an all-electric range, the car can only do 70 miles. The Jaguar C-X75 boasts a combined range of 560 miles. In fuel economy terms, that equates to just under 30 miles per gallon.

The Jaguar C-X75 also has a Formula One race-inspired 1.6-litre twin-charged diesel engine. This four-cylinder engine alone produces 502 brake horsepower. The rest of the power gets generated by the electric motors.

Because the car only weighs 1,350 kilograms, it can reach 60 miles per hour from a standing start in just over three seconds.

It’s also an eco-friendly supercar. With carbon emissions of just 89 grams per kilometre, it would be exempt from car tax in the UK. Now if that’s not a reason to convince your spouse that you want to buy a supercar, I don’t know what is!

Setting out blueprints for future supercars

At the time, Adrian Hallmark, Jaguar’s Global Brand Director, had this to say:

“[The Jaguar C-X75] represents the pinnacle of Jaguar’s engineering and design expertise.”

He also went on to say how it’s likely the car will be used as the basis for future Jaguar supercar projects.

I was browsing AutoBlogGreen today and I found out that Top Gear had done a piece on the Tesla Roadster. This was something I had been waiting for for a very long time, because I love the British show and couldn’t wait for their take on the famous electric supercar. Performance wise, the car, fitted with Tesla’s Powertrain 1.5, definitely impressed Jeremy Clarkson, likening the car to broadband motoring in a world of dial-up. However, that was before the car’s battery died after 50 miles of driving. Then they were not impressed by the 16 odd hours it would take them to charge it back up. So they got another Tesla Roadster, which Jeremy managed to overheat (overheated motor, he said, which is odd because the electric motor is just air-cooled for its nominal cooling requirement). To add insult to injury, somehow, the brakes broke on the first one while it was sitting in the garage. So this led the show’s hosts to deem the car impractical for today’s world of driving. Here is the Top Gear: Tesla Roadster Youtube video, which will probably go down soon:

[EDIT: If you want to see Tesla’s side of the story, scroll down to the first comment of this article, by Rachel Konrad, Senior Communications Manager of Tesla Motors. Top Gear’s piece ended up being somewhat of a PR disaster regarding Tesla’s reliability, and hearing another side to the story is helpful.  I won’t make a judgment on what happened because I wasn’t there and I can only write about what was in the video.]

The other host on the show, James May, sparked my curiosity at the end, talking about finding an alternative to the battery electric car and future of motoring. So I found the James’ segment on the Honda FCX Clarity Hydrogen electric car. I have never been a fan of hydrogen cars, because they are about as technologically advanced as spaceships and don’t seem like they will be practical economically. Some say the car, right now, would be priced at $10,000,000. Plus, hydrogen is something Shell can sell you, so of course they will push this on us. But I was impressed by the FCX Clarity Hydrogen, which is really basically just an electric car with a hydrogen powered generator that will extend the range to around 300 miles. So it utilizes the superior efficiency of an electric motor while eliminating the bulk and range limits of batteries.  Also according to the video, hydrogen is about at cheap as gas and the car’s only byproduct is water. Don’t be fooled though, the hydrogen car is very far down the road. Here is the Top Gear: Honda FCX Clarity Hydrogen segment: