The folks over at AMP Motorworks were nice enough to let me ride along in their Progressive X Prize AMP’d Sky at the Remy headquarters.  They also let me drive their small electric SUV, the AMP Equinox.

We’ll start with the Equinox.  The GM SUV is converted to electric pretty seamlessly.  You really cannot tell the vehicle is electric from the exterior or interior. None of the cabin space is altered by the battery pack space requirements.  The ignition is a simple, turn key operation, just like any other car.  When I let off of the brake, the vehicle lurched forward very naturally, like it was floating, not pulling.  The SUV behaved like it should around the corners and the regenerative braking was not obtrusive.  The most noticeable example of regen braking done wrong would be the Mini E, which seems to slam you into the wheel every time you let off of the gas.  The AMP Equinox behaved exactly as an SUV should, smooth and comfortable, with enough pep to accelerate onto the highway.  I really have no criticism of the vehicle, it does make a little more noise than I expected.  The motor spools when you accelerate, and makes about the same amount of noise as a quiet, new regular car.  And there are some “electric noises” when some controlling devices seem to be communicating. 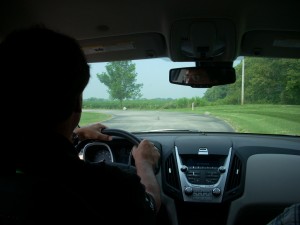 Overall, the AMP Equinox is a fantastic premise, a roomy SUV for the small family.  Homeowners are the demographic that will most easily be able to charge their electric vehicles.  So a fully capable electric SUV is a great way for most of America to reduce their consumption and carbon footprint, all while saving money over time.

Next, I got to ride along in the AMP Sky.  AMP’s driver was really doing a good job dissolving the past belief that electric cars can’t be fun.  Before I rode along, he was doing some pretty vicious donuts in the parking lot.  And he made sure to squeel the tires at least a little bit with every rider, no matter how old and timid.  I took a little video with my point and shoot, and I had to be careful not to let it slip out of my hands.  The video is not very good quality, but it gives you a good idea of the sound the car makes, and it’s power, although he didn’t have enough room to really unleash it.

In closing, these are a couple great, electric cars.  However, AMP Motorworks is still a relatively small operation.  Hopefully, they can expand in the next few years so that we can see many more of their conversions on the road.