RTEV, the company behind Ruff and Tuff electric ATVs, and Shuanghuan Automobile Company have formed a partnership that will see the Wheego Whip arrive in the US by May of 2009. Wheego is the street division of the Atlanta-based company and is now headed by former Miles Electric Vehicles COO, Jeff Boyd. If you are looking at the picture above and thinking, “Dude, that’s a Smart Fortwo!”, you’d be wrong because this, my friends, is a Shuanghuan Noble upon which the Whip (E-Noble outside the US) will be based.

The Whip is said to be capable of 60 mph but will be restricted to Neighborhood Electric Vehicle (NEV) status in America until it can pass Department of Transportion muster. Able to travel 50 miles on a charge, the not–so–Smart car will be packing (AGM) batteries for now. The bodies will be built in China but will have their electronics and powertrain installed in the US. Get all the details in the press release after the break plus a bonus video of a Whip prototype getting checked out on an episode of Talking with Tami.

Last update: 9:55 a.m. EST Nov. 19, 2008 ATLANTA and SHIJIAZHUANG CITY, China, Nov 19, 2008 /PRNewswire via COMTEX/ — RTEV (Ruff & Tuff Electric Vehicles) and Shuanghuan Automobile Company announced today that they have formed a partnership to produce and market affordable all-electric cars for sale around the world. The first automobile will be a two-seat compact car that will be launched in the United States in May 2009. It will be marketed exclusively by RTEV under the Wheego Whip name in North America and by Shuanghuan Automobile as the Electric Noble (E-Noble) in the rest of the world.

While the car is capable of speeds of 95 kHz (60 mph) it will be sold to different countries specifically designed to meet the safety requirements of the particular country. For example in the U.S. it will be launched as a Low Speed Vehicle (LSV- 25 mph max) or Medium Speed Vehicle (MSV- 35 mph max) depending on local state regulations, until it passes U.S. Department of Transportation safety crash requirements, which is expected sometime in early 2010.

The E-Noble will be manufactured by Shuanghuan at their factory in Shijiahuang. While the Wheego Whip will be based on the Noble platform, it will undergo final assembly, including the motor, drive train, controller, electronic components and be programmed in the U.S. The cars will feature environmentally friendly dry cell sealed (AGM) batteries, which require no maintenance and feature an on-board high tech charger. The car will travel 80 kilometers (50 miles) on a single charge-and plug in for a recharge on any standard household 110 or 220-volt electrical outlet.

“What has really impressed us with Shuanghuan is their attention to detail in providing a high-quality fit and finish and smooth ride to the car,” explained Mike McQuary, RTEV CEO. “Once we locked down the systems and components for a high quality electric drive system, we undertook a global search for a car manufacturer that would meet our expectations of a driving experience that was seamless when compared to its gasoline counterparts. While several car companies that we talked to had solid mechanical systems, it was Shuanghuan that emerged with a commitment to meet the quality standards that American drivers have come to expect in an automobile. Their production of the gas powered Noble gave them a great head start, in that it was more a matter of adaptation of a vehicle, rather than trying to develop something from scratch. They share our vision and see the important potential for the emergence of an electric car as an everyday part of consumer transportation.”

“When we were first approached by RTEV, it was their passion that first got our attention. There have been several companies that have approached us and bought one or two cars and tried to convert them to electric. But it was RTEV that quickly emerged as the technology leader for electric vehicles. Combine this with their successful track record as a management team in other ventures and we knew we had made the right choice for a partner,” said Shuanghuan General Manager Cheng Bing.

“There is a perfect storm of macro-events that are causing people around the world to take inventory of their personal habits and their effect on the environment across a wide spectrum which includes transportation, and RTEV is entering the marketplace at this pivotal time,” said McQuary, former president of internet service providers MindSpring and EarthLink. “The long-held assumption has been that electric vehicles are quirky and impractical for everyday use, and are of interest to only a small group of eco-friendly consumers. We believe that our vehicles appeal to a huge market segment and will fill a middle market demand gap at the right time, with the right vehicles, and a with national dealer network to provide service and support.”

Shuanghuan Automobile Company has been making cars since 1988. Its current car models include the SCEO SUV and the Noble. The company is focused on zero defect manufacturing processes and passed the ISO9000 quality control system certification in 2000, and gained 3C constraint products certification in 2003.

RTEV is an innovation-driven and environmentally-conscious manufacturer of Electric Vehicles (EVs). RTEV is comprised of two divisions, Ruff & Tuff and Wheego. The company currently features recreational vehicles under its Ruff & Tuff brand, and street legal cars under the Wheego brand. RTEV is led by an experienced management team that includes McQuary; President Bo Huff, who brings twenty-one years of experience in the electric vehicle industry; and Jeff Boyd a 25 year automotive industry veteran who was most recently the CEO of electric car company Miles Motors. Privately held, RTEV is based in Atlanta, GA with distribution points in Winnsboro, SC; Baton Rouge Louisiana; and Long Beach, CA.

Wheego Whip? Watt? originally appeared on Autobloggreen on Nov 20th 2008 at 8:01AM EST. Please see our terms for use of feeds.

Personally I find this to be one of the most exotic electric vehicles out there.  This is the Eagle G-Car from G Car Motors Inc. of the Philippines. It made some news about a year ago, and I haven’t really found any updates on the NEV. The top speed is about 25 mph and is capable of running 50 miles on a charge. Charging takes about 4-6 hours. What intrigues me about this car is the price. Prices range from 140,000 to 280,000 pesos, about 3,300 to 6,600 USD.  I would buy that car right now! If the street laws permitted me to drive around town in zones under 50mph. Apparently, it can be registered as a Low Speed Vehicle (LSV) in Canada and the United States. Click on picture below to read the official brochure. 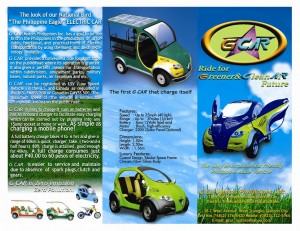 Check out the G Car Motors site, where you can find some more info and possibly order one. It hasn’t been updated since January and I emailed them see if there were any developments. No response, but I hope they are doing well, because these are very economical electric vehicles. However, I imagine they would have a tough time passing many safety standards in most countries.

Here is a video of the car in action: