If you go to Google and type in “luxury cars” you will have a plethora of results returned back to you! As you can imagine, the luxury vehicle industry is vast, and there is more than enough choice for consumers.

But there’s one thing that all those “fully loaded” cars have in common: they aren’t very good for the environment! Some cars like the new Jaguar XE boast about having fuel-efficient diesel engines, for example. 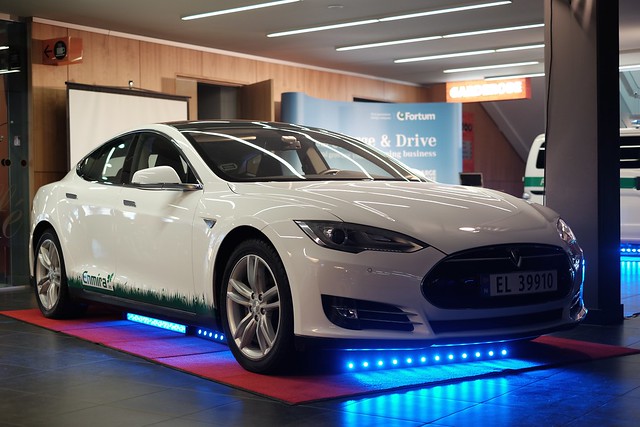 Any internal combustion engine will emit toxic CO2 gases into the atmosphere. One obvious solution is to drive an electric car. After all; they don’t produce any emissions, right? The big issue with most electric vehicles is range anxiety.

A typical electric vehicle can only do a range of 80 to 120 miles before needing a charge. You might think that, in a luxury car, that figure might drop down to around 20 miles! But there’s one car on the market that has changed that problem forever. I am, of course, talking about the Tesla Model S!

It’s a luxury car that isn’t powered by an internal combustion engine. Nor does it have a hybrid drive system. It’s a plug-in electric vehicle that offers not just tens but hundreds of miles of range before needing a charge. So, what are the car’s selling points? They are as follows:

If you want to charge the Tesla Model S from a standard wall socket, it comes with the cabling you need. But what if you want to connect up to a “type 2” charger? That’s no problem; Tesla also includes a cable for that too. When you’re out on the road, you’ll find it easy to charge your vehicle without worrying about plug problems.

Tesla are expanding their range of branded public charging points, dubbed “superchargers.” Depending on the model you buy, you can use these charging points for free. It’s also possible to have a fast DC charging point installed at your home.

When we want to buy a luxury car, we might look at websites like www.hunterslandrover.co.uk. The high earners among us might even get tempted by a Range Rover Autobiography, for example.

Tesla wants those people to visit their website so they can check out the amazing luxury on offer with the Model S! Land Rover offer hybrid luxury models. And even Bentley announced a hybrid luxury concept car last year.

But what if you want a zero-emissions vehicle that caters for the discerning motorist, and you want one today? Well, until you can buy an electric Range Rover or Bentley, there’s always the Tesla Model S.

You can enjoy such features as electrically adjustable and heated leather seats. A massive 17-inch touchscreen infotainment system serves as the central hub of your car. You can also add extra options like DAB digital radio and extended Nappa leather upholstery.

As you can see, you get a lot of car for your money when you get a Tesla Model S. The only downside is that it’s a vehicle aimed at the premium end of the market. So if you’re thinking of buy a luxury electric car on a budget, you might want to consider an alternative vehicle.

Since 2008, we have been covering the electric vehicle market, and things have certainly changed since then.  Back in the day, an electric vehicle startup, Tesla Motors, perked international interest with the Tesla Roadster.  Then dozens of concepts, specialized automakers, and eletrofitters rolled in. I remember when it was only the little guys like ZAP, Think, Tesla, Zenn, etc. We’ve seen exotic supercars and concepts like the Eliica, Aptera, and Lightning GT, and low speed, neighborhood electric vehicles like the BG-100 and REVA. Some came to fruition, some did not.  This international attention  garnered the interested of the major automakers like Ford, GM, Nissan, and Mitsubishi.  These majors not only created concepts, but have begun delivering electric vehicles in mass.  Here are a few fully charged, highway capable 2012 models for the masses that you can order for delivery right now. In the US, these all qualify for a $7,500 federal tax credit.

The 2012 Ford Focus EV is one of my favorites because, from the outside, you can’t even tell that it is an EV. The Ford Focus EV is built on the same glider as the third generation ICE model. The EPA rated its range at 76 miles per charge and a fuel economy of 105 MPG equivalent. Production began in December 2011, in Wayne, Michigan.

I had a chance to drive the first model of the  Mitsubishi i-MiEV at the 2010 New York Auto Show. I preferred it too the Mini-E, because it had more natural coasting and braking, and the battery was tucked under the carriage instead of being jammed in the back hatch area. On the Japanese test cycle, the vehicle has a 100 mile charge, but the EPA, the harsh critics they are, rated it at merely 62 miles. Over 20,000 of these little buggies have been sold worldwide. Prices vary widely regionally and so do tax incentives. In the Japanese market, the i-Miev is only $23,000 after subsidies, in Europe and the US it’s about $30,000, and $50,000 in Australia.

I have already spotted a few 2012 Nissan Leafs  in the wild already.  Although, I don’t know why so many people choose the seemingly trademark, “blue ocean” color.  The EPA rated this hatchback at 73 miles-per-charge. After tax incentives in the US, the price is solidly below $30k at $27,000.  Nissan is claiming an increase in range and a pretty significant decrease in price in the next model year.

We are all still wrapping our heads around a company from Palo Alto, California won the Motor Trend Car of the Year with the 2012 Tesla Model S. Not Detroit, Japan, or Germany, but essentially a company founded by a guy who made his first millions from PayPal. The award really means something though: that technology, innovation, and thinking outside the box in the automotive world can really evolve the industry in ways not possible through traditional thinking. Motor Trend states the $50,000 supercar (after US tax credits) “smoothly effortless as a Rolls-Royce, can carry almost as much stuff as a Chevy Equinox, and is more efficient than a Toyota Prius.” This simply was not possible before.

Tesla has become world renown for their superior performance electric vehicles. The Roadster put them on the map as the first production electric car that was actually refined, cool, and exciting. The heir to the awesome electric car throne, the Model S, will finally be delivered in 2012. The Model S sedan is targeted at electric vehicle fans with funds and maybe a couple kids. Remarkably, the base model will remain under their original target price of $50,000, at $49,900 after the $7,500 federal tax credit for electric vehicles purchased in or after 2010.

Tesla is providing a slew of classes and options for this electric sedan in hopes of capturing the absurdly rich and the upper middle class market share, so read closely.  There are four classes of Model S: the Model S (plain, vanilla), the Model S Performance, the Model S Signature, and the Model S Signature Performance. On top of that, the plain Model S version has three, liquid cooled, lithium ion battery options, at 40, 60, and 85kWh. The other three classes (Performance, Signature, Signature Performance) all have the 85 kWh battery, standard, which pushes their ranges to a whopping 300 miles per charge. The 40 kWh option gives 160 miles and a 0-60 of 6.5 seconds, the 60 kWh battery puts out 230 miles and 5.9 seconds. The 85 Kwh pack gives you a 0-60 in 5.6.  With the performance option that drops down to 4.4 seconds.  The Signature label  doesn’t necessarily enhance performance, but they are limited edition and available mid-2012, a few months earlier than the non-Signature class.  They also carry about a $30,000-$50,000 premium over the base model.

All of the Model S classes will feature a 17-inch touch screen monitor which will contain media, GPS, and communications.  The 200 watt stereo system will have radio, satellite radio, and USB ports.  No CD player though, that’s so 20th century.

If you opt for the Signature series, you get the Tech Package standard, which includes xenon lights, keyless entry, LED foglamps, turn by turn navigation, power rear liftgate, back camera, rear USB ports, homelink, and electrochromatic side mirrors.  A premium stereo system is also standard in the Signature class, and 1,000 bucks otherwise.

Hope this helps clarify the many options and models of the Model S.  For more information, visit Tesla’s Specifications page.