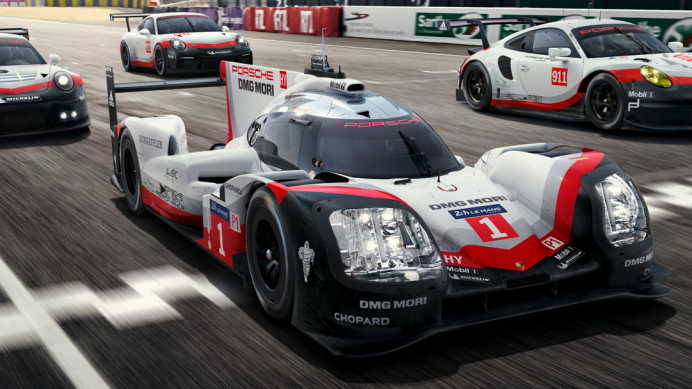 Cars entered into the Le Mans P1 event have hybrid systems that use regenerative braking to capture energy when the car slows down. One of which is the Porsche 919 Hybrid. In 2017, Porsche is returning to the top class to defend its title as FIA WEC World Champion from 2015 and 2016 with the 919 Hybrid.

Porsche’s fourth-generation 919 Hybrid is powered by a turbocharged four-cylinder, two-liter petrol engine delivering almost 500 hp that drives the rear axle. Its ally is an additional electric motor delivering more than 400 hp to the front axle. The latter is fed by two energy recovery systems. Converted braking and exhaust energy is temporarily stored in a liquid cooled lithium-ion battery. Porsche is gaining key insights for series production have been obtained from the LMP1 prototype project: examples include the cooling for the battery and electric motor, the connection
technology for extreme high voltage as well as the battery management and the systems’ design.

With the 24 Hours of Le Mans around the corner, we thought we’d delve into the event and check out the cars in detail and see how they’re made in order to deal with this grueling race. We also find out how Guido Van Der Garde prepares for Le Mans 24 Hours and the difference between Le Man and Formula 1. We’ve also thrown in a few tips if you’re going to attempt to watch the full 24 Hours without falling asleep.

How To Conquer 24 Hours of Le Mans by SELECT CAR LEASING.