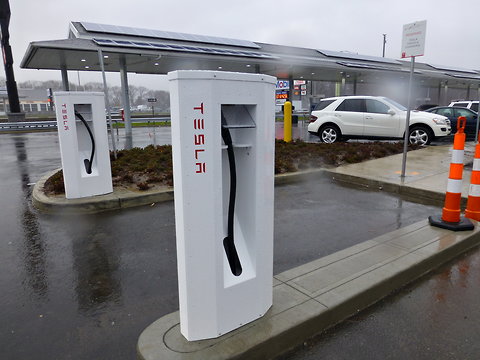 Earlier this year, Elon Musk announced his plan to build solar powered, fast charging stations across America, available to Tesla Model S owners to use for free. A lot of my colleagues were very excited about this prospective announcement. To me, it seems downright impossible: high fixed capital costs, and no revenue from the stations.  Additionally, these charging stations aren’t even compatible with Tesla’s other model, the Roadster, and you can forget about cross manufacturer compatibility.  Solar panels are not just plug and play either, they require maintenance and cleaning if you want them to perform up to their specified manufacturer standards of efficiency.

Even if the solar panels operate at optimal efficiency, the fast chargers will draw more power than the solar panels can produce at one time, so unless Tesla has on-site electricity storage, the company will have to buy electricity at a higher rate than they can sell back to the grid.

Another challenge is the fact that utilities will often charge a hefty “demand charge” per month because of the high load these chargers can put on the grid, says Arindam Maitra, a senior project manager at the Electric Power Research Institute. Fast charger owners will have to pay that fee even if no one uses the station. At least one DC fast-charging system charges $7 per charge, which is more expensive than buying gasoline for the equivalent range in a conventional car. –Technologyreview.com

Despite the economic pitfalls, Tesla charged on this year.  They built 6 charging stations in SoCal and have already begun their electric corridor in the northeast.  The station pictured at the top is in Milford, Conn.  Whether anyone has actually used it for its purpose remains to be seen.  These stations will charge between 4 to 6 cars and the initial capital investment ranges from $100,000 to $250,000 This could be a substantial financial liability for Tesla, which has already announced that it needs to raise more money to keep operating. When you think about the infinitesimal amount of people that actually own the Model S currently, and then they have to be driving on that specific route, the logic seems ridiculous.  Yet they are still building charging stations, and they need to sell a lot more cars for this plan to be remotely logical or we will get another Solyndra ordeal.  Project Better Place seems to be turning in a bad direction in the final quarter of 2012, asking for emergency funding from investors and laying off hundreds of employees.

Fast charging is a great idea in theory. You can drive a few hours, stop, have lunch or stretch your legs and browse a shop, then get back on the road. Existing rest stops and commercial centers will see the value in drawing electric vehicle owners to their area for 30 minutes. Drivers can plug their car in for free, and businesses can lure in generally higher income patrons that buy electric vehicles. There is a possible business model to building fast charging stations that provide free or cheap electricity. However, that is not Tesla’s business model. They hope to increase the value  a very expensive car by creating a free charging infrastructure for one specific model.

I just don’t think this type of widespread endeavor can possibly work, given that only one luxury model is compatible, and given that Tesla will not receive revenue to sustain the service.  Provide me one example of a capital intensive, widespread, exclusive, free service that has worked in America. But this is what Elon Musk does: he creates things before we appear to need it (PayPal, SpaceX). I would like to be proven wrong. So if Elon or anyone has a brilliant defense of the plan, please feel free to discuss in the comments